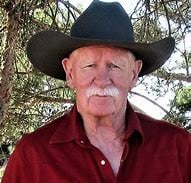 Had the unique opportunity of reading two short plays and a monologue by Red Shuttleworth, a Wrangler Award winner and three-time Spur Award winner for his poetry. The plays and monologue I read are part of his “Americana West,” a series of 100 short theater pieces, set in the West from 1900 to 1999. (He hasn’t finished all 100 yet.)

The three I read are five to seven pages long, with only one or two characters and set in small towns, some about to blow away—both characters and towns.

Grim slices of life punctuated with gallows humor, these stories may not be to everyone’s taste, but they are, nonetheless, mirrors for us to ponder. Should you find any of Red’s “Americana West” series in performance, you might want to consider taking it in.