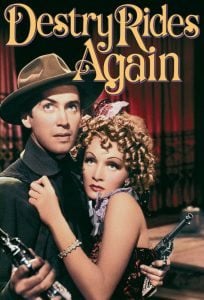 About once a month several of us meet to watch Western films and discuss them. Our group includes Johnny D. Boggs, award-winning author of numerous Western novels (including his recent RETURN TO RED RIVER), Kirk Ellis, Emmy-winning writer (HBO’s miniseries JOHN ADAMS) who is currently away in Palm Springs, David Morrell, award-winning thriller author (RULER OF THE NIGHT), and Robert Nott, a reporter for the Santa Fe New Mexican and a writer of several books about classic Western actors including Randolph Scott, and also a memoir with Max Evans about Sam Peckinpah.

We gathered a few nights ago and it was my turn to choose the films. I brought DESTRY RIDES AGAIN, an engaging Western that’s also part comedy with a couple of rousing musical numbers thrown in. Directed by George Marshall, it stars Marlene Deitrich as Frenchy, the brash saloon owner, and a young James Stewart in his first Western role as Tom Destry Jr.

While the story itself is pretty standard Western fare—a good lawman cleans up a crooked town—it’s the way the story is presented that marks this as something more than just another Hollywood oater. Destry refuses to wear a gun and that makes for a different and intriguing story, especially since this film was shot and released in 1939.

Director George Marshall, who started his film career as an extra in 1912, keeps the action moving. It’s reported he began shooting with only a 45-page script and the actors improvised some scenes as they went along. While many of the comedic elements wear thin quickly, (a character who gets flustered often reacts by yanking his shirtfront out of his trousers), it’s Destry putting clues together about the mysterious disappearance of the former sheriff that leads to a big brawling showdown.

But that’s not the only brawl. The first happens between Deitrich’s Frenchy and Lily Belle Callahan played by Una Merkel. (Lily’s husband had lost his pants in a wager to Frenchy and Lily goes into the saloon to retrieve the trousers.) It’s a famous fight in cinema that Marshall got in one take.

Also, Marshall’s staging of Dietrich’s swagger while singing “See What the Boys in the Back Room Will Have” is a true gem to watch. (Madeline Kahn performed a wonderful parody of Dietrich’s character in Mel Brook’s BLAZING SADDLES.)

Incredibly, the film finished shooting in early November of 1939 and was released just after Christmas. DESTRY RIDES AGAIN was part of a landmark year in cinema that included GONE WITH THE WIND, MR. SMITH GOES TO WASHINGTON, THE WIZARD OF OZ, and STAGECOACH.

The second entry I brought was an episode of the 1960s TV series THE REBEL starring Nick Adams, and may well have been an inspiration for Quentin Tarantino’s THE HATEFUL 8. Entitled “Fair Game,” it deals with a group of strangers spending the night at a remote stage depot. One of them is a bounty hunter and another a woman in handcuffs he’s taking in for the reward.