WESTERN NIGHT AT THE MOVIES: ALONG CAME JONES (**)

It was Johnny D. Boggs’s turn to choose the film for our Western Night at the Movies virtual meeting this time and he selected ALONG CAME JONES, a charming little comedy from 1945 starring Gary Cooper and Loretta Young.

Spoofing the stoic Western movie idol he’d been playing (like his roles in THE PLAINSMAN and THE WESTERNER), Cooper delights as Melody Jones, a lunkheaded, butterfingered, silly song-singing cowboy who wanders into the wrong place at the wrong time and gets mistaken for wanted killer, Monte Jarrad (Dan Duryea). To further complicate matters, Jones spies gorgeous Cherry de Longpre (Loretta Young) and falls for her that very moment, but she’s got brains as well as a secret she’s hiding at her ranch. 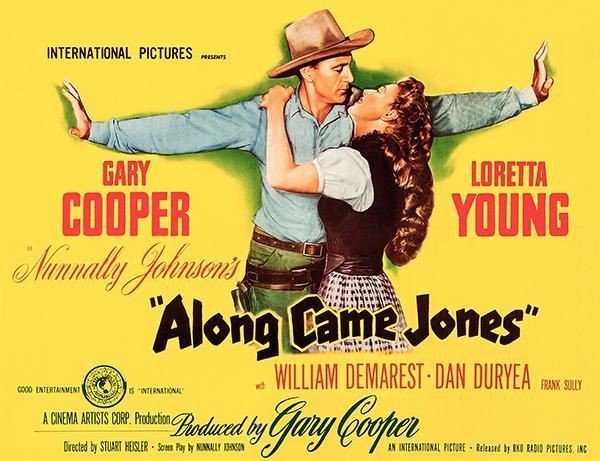 As Jones’s sidekick, William Demarest, who made a career of playing curmudgeons, is as cantankerous as they come here, and Duryea ably demonstrates why he could play rattlesnakes so well.

The screenplay by Nunnally Johnson, Oscar nominated for THE GRAPES OF WRATH four years earlier, was based on the comedic novel USELESS COWBOY by Alan LeMay, whose next novel was THE SEARCHERS. But Jonson’s script isn’t always comedic; there are some dark and violent moments that have a noir sensibility at odds with much of the rest of the film.

This was also the first and only picture Cooper produced having formed International Pictures with screenwriter Johnson. Reports indicated that Cooper didn’t take well to the role of producer, being as he was notoriously tight with money. For example, he objected to the ranch wardrobe chosen for Loretta Young. Described as “simple cheap store dresses,” he saw no reason to spend around $175 on each one when the same could be found at a fraction of the cost at local stores. When told the studio-made costumes would be wrinkle resistant and hold up better for repeated takes, along with realizing he would have the responsibility of explaining to his glamorous co-star that she would wear off-the-rack dresses, Cooper changed his mind.

You can find ALONG CAME JONES on DVD and on youtube.

Along with Johnny, record eight-time Spur Award-winning author for such novels as RETURN TO RED RIVER, our group includes Kirk Ellis, Emmy-winning screenwriter and producer of HBO’s JOHN ADAMS and TNT’s INTO THE WEST, Kirk’s wife Sheila, David Morrell, award-winning author and New York Times best-selling author of FIRST BLOOD, and Robert Nott, award-winning journalist and author of THE FILMS OF BUDD BOETTICHER.

Watch the movie yourself and leave your thoughts in the comment section below!