WESTERN NIGHT AT THE MOVIES: AT GUNPOINT (**) 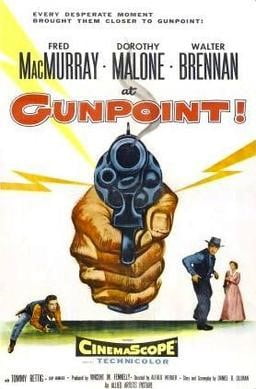 It was Robert Nott’s turn to select our film for May and he chose AT GUNPOINT (1955), a well-intentioned B Western that’s a variation on HIGH NOON released three years earlier.

More melodrama than drama, AT GUNPOINT features Fred MacMurray as Jack Wright, the owner of the general store in the town of Plainview, who’s never handled a gun before but his very lucky shot wounds a bank robber who’s then shot dead by a local rancher. The robber’s brother, Bob Dennis (Skip Homeier), vows cruel vengeance.

As an actor, MacMurray arguably did his most memorable work playing despicable types, like insurance salesman-turned-murderer Walter Neff in DOUBLE INDEMNITY or Jeff Sheldrake, the womanizing heel in THE APARTMENT. Here, he brings pathos to his everyman character, first brushing off the townspeople’s accolades with humility and then struggling with the decision to run or stay in the face of deadly danger.

Credit goes to scriptwriter Alfred G. Ullman for including Mac’s distressed wife Martha (Dorothy Malone) and worried son Billy (Tommy Rettig) as they must contend in their own ways with the town turning its back on all of them. The one citizen who sides with Jack is old Doc Lacey (the irascible Walter Brennan), a man steadfast in his ideas about what’s right and wrong.

Also, though Alfred Werker’s direction is pretty much by the numbers, he does instill a sense of impending dread during a windstorm that engulfs the town like an Old Testament plague.

With a running time of 81 minutes, AT GUNPOINT is available for free on YouTube.

Along with Robert, award-winning journalist and author of several books on Western films, including THE FILMS OF RANDOLPH SCOTT and his most recent THE FILMS OF BUDD BOETTICHER, our group includes Johnny D. Boggs, record eight-time Spur Award-winning author and Owen Wister Award winner whose latest work is A THOUSAND TEXAS LONGHORNS, Kirk Ellis, Emmy-winning writer and producer of HBO’s JOHN ADAMS and TNT’s INTO THE WEST, Kirk’s wife, Sheila, and David Morrell, award-winning author and New York Times best-selling author of FIRST BLOOD, the novel that introduced the character Rambo.

Watch “At Gunpoint” Below