WESTERN NIGHT AT THE MOVIES: BADLANDS (***) 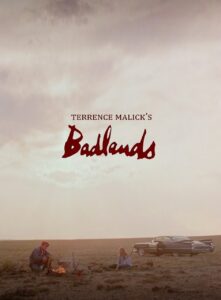 It was my turn for Western Night and I chose BADLANDS (1973). Written by Terrence Malick, it was the first film he produced and directed. (I’m not a fan of any of his other work, like THE THIN RED LINE or THE NEW WORLD.)

Part contemporary Western and part crime drama inspired by the Charles Starkweather/Caril Ann Fugate killing spree in 1958, BADLANDS takes place in the mid-west of 1959 and is told through the eyes of fifteen-year-old Holly (Sissy Spacek). Her observations of the world possess a theater of the absurd quality: “At this moment, I didn’t feel shame or fear, but just kind of blah, like when you’re sitting there and all the water’s run out of the bathtub.”

She allows herself to be swept away by Kit (Martin Sheen) a shiftless garbage collector ten years older than her. He’s the disaffected youth of his day, wears a jean jacket, white t-shirt and a pair of fancy cowboy boots. He also carries a revolver and feels that society, and certainly Holly’s sign-painter father (Warren Oates), has shunned him.

Neither Kit nor Holly are presented as heroes to be admired. Kit is the definition of sociopath and Holly goes along with him because he’s the first person in her young life who seems to care what she thinks.

Using various pieces of music, particularly Carl Orff’s haunting “Gassenhauer,” Malick imbues the film with a kind of fairy tale feeling, but never softens the cold bloodedness of the story.

With eastern Colorado filling in for South Dakota and the northern badlands, cinematographers Brian Probyn, Tak Fujimoto, and Stevan Larner make the long flat plains and brilliant blue sky as much a character as Holly and Kit.

BADLANDS runs 94 minutes and is available on DVD and Blu-ray.

FULL, FREE MOVIE WITH DUTCH CAPTIONS
CHECK OUT MY BOOKS WHILE YOU'RE HERE!