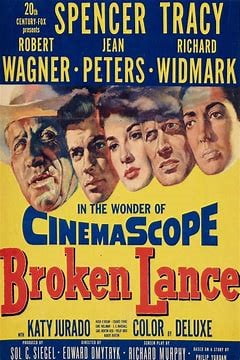 It was David Morrell’s turn to choose the film and he selected BROKEN LANCE (1954).

The story goes that movie producer Sol Siegal thought that the 1949 noir film, HOUSE OF STRANGERS, set in New York City about a wealthy but stern father with four sons–three of them worthless and one decent—could work as a Western. Add a nod to William Shakespeare’s KING LEAR, and you have BROKEN LANCE.

It’s a promising and intriguing concept. Moving the story from the dark, moody streets of New York to the wild and open Arizona desert doesn’t hurt this tale of family honor, jealously and betrayal. There are standout sequences, such as a confrontation at a copper mine where Tracy shows he can be as ornery as John Wayne was in RED RIVER. But there are other times when the film seems to slow to a crawl.

The screenplay was written by Richard Murphy, and a “story by” credit for Philip Yordan, who wrote the screenplay to HOUSE OF STRANGERS and would win an Oscar for best story for this film. Edward Dmytryk was hired to direct, having just completed THE CAINE MUTINY, though it would not be released for several more months. The solid cast includes Spencer Tracy as the tyrannical patriarch, Matt Devereaux. His wastrel sons are played by Richard Widmark, Hugh O’Brian and Earl Holliman, with Robert Wager in the role of his half-caste good son. As Devereaux’s Comanche wife, Katy Jurado would receive her first and only best supporting actress Academy Award nomination.

Filmed in CinemaScope by Joe MacDonald, the film has a sharp edge, the colors vivid, particularly in the new blu ray from Twilight Time which David brought for the screening. With a running time of 96 minutes, BROKEN LANCE is also available for rent on Prime Video.