WESTERN NIGHT AT THE MOVIES: SONGS MY BROTHERS TAUGHT ME 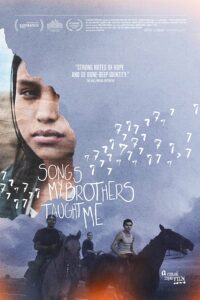 For this evening’s Western Night at the Movies, Johnny D. Boggs brought the fascinating and remarkable SONGS MY BROTHERS TAUGHT ME (2015). A contemporary Western tale filmed on location at the Pine Ridge Indian Reservation, it is a deeply moving look at the troubles a family on the reservation face. Call it the struggle for hope.

At first, the film looks and feels like a documentary, but the harsh realism along with stretches of silence, quickly give way to a story centering on a teenage brother and his little sister and how they cope with their lives and those around them.

To play most of the parts, writer/director Chloé Zhao (she won the Oscar for best director in 2021 for NOMADLAND) cast Oglala Lakota Indians from the reservation and their performances are bristling and believable. Standouts include John Reddy as Johnny Winters, a teenager soon to graduate from high school who makes money selling illegal drugs and alcohol yet longs for a future but has no idea how to attain it, and Jashuan St. John as Johnny’s eleven-year-old sister who may be on the edge of making the right decisions, or the wrong ones.

There are moments when the film seems to wander, but the power of the story remains, as sharp as the images Zhao and her cinematographer, Joshua James Richards, capture. This is a film that stays with you.

With a running time of 98 minutes, SONGS MY BROTHERS TAUGHT ME is available for rent on Amazon Prime, and on DVD and Blu-Ray.

Along with Johnny, record nine-time Spur Award-winning author and Owen Wister Award winner (take a look at his A THOUSAND TEXAS LONGHORNS), our group includes Kirk Ellis, Emmy-winning screenwriter and producer of HBO’s JOHN ADAMS and TNT’s INTO THE WEST, Kirk’s wife, Sheila, David Morrell, award-winning author and New York Times best-selling author of FIRST BLOOD, the novel that introduced the character Rambo, and Robert Nott, award-winning journalist and author of several books on Western films, including his most recent THE FILMS OF BUDD BOETTICHER.

Watch The Official Trailer Below