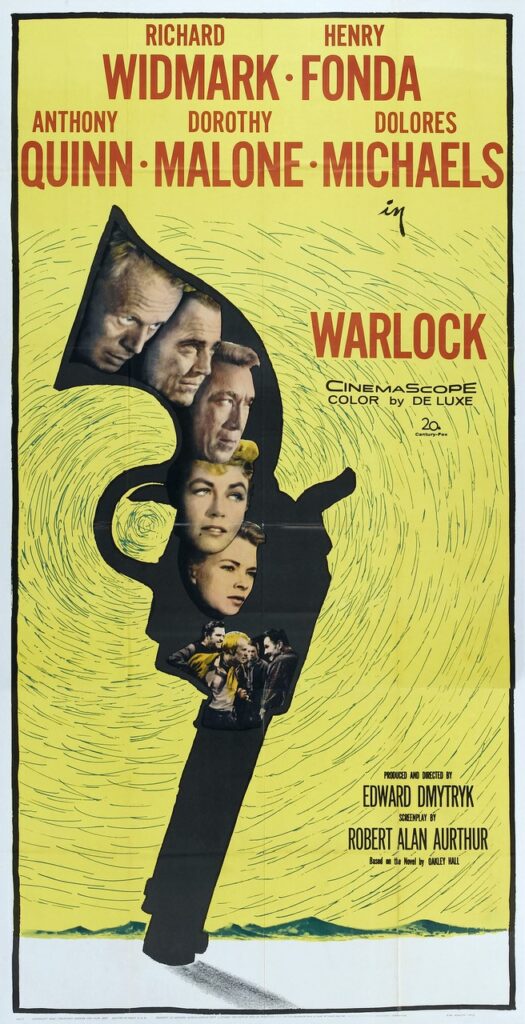 For our latest Western Night session, David Morrell brought a film that generated much discussion, mainly due to the fact that while we all found things to admire, we also agreed it was just a mess. (We enjoy discussing films, good and bad.)

Directed by Edward Dmytryk, WARLOCK (1959), based on the novel by Oakley Hall with a script by Robert Alan Aurthur, retells the story of Wyatt Earp, Doc Holliday, the Clantons and the town of Tombstone. However, if you were not familiar with the Earps, the Clintons and the gunfight at the O.K. Corral, I believe you’d be hard-pressed to follow this tangle of a movie.

Every few nights, a rough band of rustlers and robbers descend on the town of Warlock to drink, carouse and shoot anybody who remotely displeases them. With no law to help them, the town fathers decide to hire a well-known vigilante to come in and clean things up. That man is Clay Blaisdell (Henry Fonda, who memorably played Wyatt Earp in the classic MY DARLING CLEMENTINE) and he happens to have a crippled partner, Tom Morgan (Anthony Quinn).

That sounds pretty straightforward, but things quickly run awry with so many subplots that the film feels like several different movies are going on. A woman name Lily (Dorothy Malone) comes to town and she wants Blaisdell dead. Another woman (Dolores Michaels) falls for Blaisdell and that greatly displeases Morgan who becomes almost unhinged. One of the bad guys (Richard Widmark) decides to change sides and takes the job of town deputy, but he has this bad brother, and so on. The reason to keep watching? To see how, or if, all this gets untangled.

Fonda, Quinn and Widmark each bring a real presence to the screen, as do many of the supporting players. And there are wonderful details, like a wagon spraying water on the town street to keep the dust down.

One of the major pluses of this widescreen cinemascope film is the cinematography by Joe MacDonald, (whose work includes VIVA ZAPATA! and THE SAND PEBBLES), and it was a pleasure to see, given that WARLOCK usually runs on television in terrible pan-and-scan.

With a running time of 2 hours and 1 minute, WARLOCK is available on a newly released Blu-Ray from Twilight Time, and also on youtube.