MOVIES WE LOVE: ONCE UPON A TIME…IN HOLLYWOOD

ONCE UPON A TIME…IN HOLLYWOOD 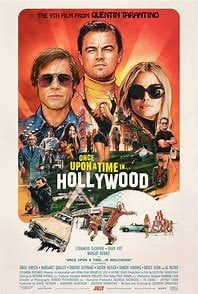 Most new films have little to entice me anymore, and years ago I used to go every week. But friends told me about Quentin Tarantino’s ONCE UPON A TIME…IN HOLLYWOOD and my wife and I went to see it. And we thought it was terrific!

Set in 1969 in Los Angeles, it is Tarantino’s love letter to a bygone era in Hollywood as seen through the eyes of Rick Dalton, (Leonardo DiCaprio), a nearly has-been TV actor, and his stunt man pal Cliff Booth (Brad Pitt). I’m not going to give away any spoilers, but I will say it is dark, funny, twisted, dream-like at times, violent, bloody, and a hoot. The acting by all is truly mesmerizing. DiCaprio and Pitt give defining performances. And while it’s long at 2 hours and 41 minutes, it more than makes up for Tarantino’s awful THE HATEFUL EIGHT and its 2 hours and 48 minutes that I’ll never get back.

ONCE UPON A TIME…IN HOLLYWOOD is very much a fairy tale, like Tarantino’s INGLORIOUS BASTERDS, as it takes known history and turns it upside down in unexpected and sometimes absurdist ways. To quote a classic movie line: “It’s the stuff dreams are made of.”