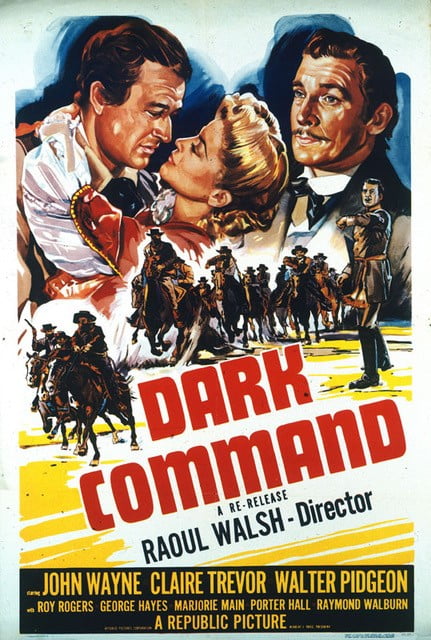 In spite of the pandemic lockdown, our Western Night at the Movies group still manages to watch a Western. Robert Nott and Kirk Ellis came up with the idea that we’d choose a film available online for free (and there’s a slew of them), watch it on our own and then we’d have a Zoom session online to discuss it.

As it was my turn to select the film, I was very pleased to find DARK COMMAND (1940) available. It stars John Wayne, Clair Trevor and Walter Pidgeon.

Based on the novel of the same name by crime and Western writer W.R. Burnett, DARK COMMAND is set in Kansas during the Civil War when Confederate guerrilla leader William Quantrill and his raiders turned Kansas bloody.

At 94 minutes, it’s rousing and enjoyable, but the filmmakers threw the history out, and that’s part of what makes it so much fun to watch. William Quantrill is played by Walter Pidgeon, but he plays a character named William Cantrell, a respected school teacher who secretly wants power and money for himself. He decides to run for town marshal of Lawrence, Kansas, but loses to an uneducated though likeable roving Texas cowboy named Bob Seaton, played by John Wayne. Complicating matters, Seaton has taken a powerful liking to the banker’s spunky daughter, Mary McCloud (Claire Trevor), who Cantrell is anxious to make his wife. When war erupts, Cantrell forms his raiders and begins looting and robbing the territory to get the big name and riches he wants.

Roy Rogers is in it, too, playing Mary’s brother who joins Cantrell, at first. And so is Marjorie Main (best known as Ma Kettle from the Ma and Pa Kettle films), who plays Will Cantrell’s mother. There’s a great scene when she holds a rifle on her son telling him that she “borned a dirty murderin’ snake that’s broke my heart to see it crawlin’ along,” and then, well, I’ll stop there. One more thing, the film has a terrific fiery climax.

The director, Raoul Walsh, a master of action adventure films, had cast Wayne in the Western epic THE BIG TRAIL ten years earlier, giving the young actor his first starring role and changing his name from Marion Morrison to John Wayne. Walsh’s career spanned better than fifty years with charming romances like THE STRAWBERRY BLONDE and comedies like THE BOWERY. But he’s best known for the crime films THE PUBLIC ENEMY, HIGH SIERRA and WHITE HEAT, and Westerns like THE TALL MEN and THEY DIED WITH THEIR BOOTS ON.