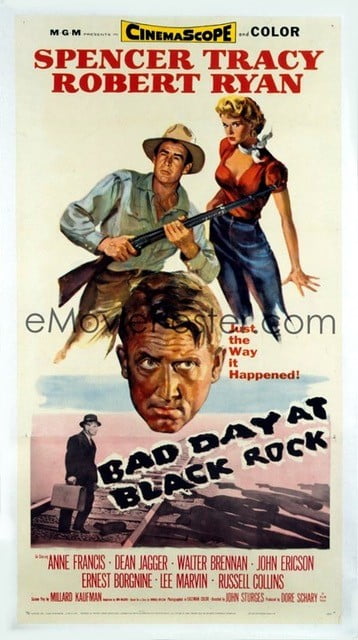 At our Western Night at the Movies gathering the other night, Johnny Boggs provided an excellent double feature: BAD DAY AT BLACK ROCK, a modern-day Western noir from 1955, and JOE DAKOTA, a low-budget remake of BAD DAY made a few years later and set in the Old West.

Both films tell the tale of a stranger arriving in a small town who says he’s searching for a man, but the townspeople are immediately suspicious. Some are afraid to talk about the man. Others are quick to say he left town. And some are downright nasty telling the stranger it’s none of his business, advising him to leave, the sooner the better. It’s an effective plot that quickly engages and keeps you wondering what will happen next.

The tight screenplay, written by Millard Kaufmann, was originally to be directed by Richard Brooks who, according to reports, was anxious to make BLACKBOARD JUNGLE instead. However, in the hands of director John Sturges, the first half of the picture maintains a palatable feeling of dread while the gut twisting second half is a race against time as to whether Macreedy will get out alive. And even in the wide-open windswept spaces of the desert town setting, there’s a desperate feeling of claustrophobia. 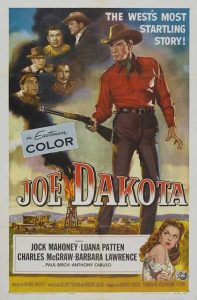 Johnny’s second film, JOE DAKOTA, featuring Western cowboy star Jock Mahoney (star of THE RANGE RIDER TV series from the fifties) as the stranger searching for an old friend, doesn’t have quite the nuance and style that BLACK ROCK does. That said, it’s still an entertaining 79 minutes.