WESTERN NIGHT AT THE MOVIES: CEMETERY WITHOUT CROSSES (**) 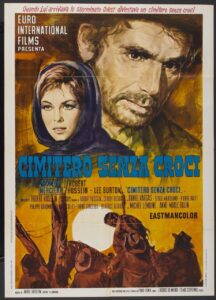 For our latest gathering, Johnny D. Boggs brought CEMETERY WITHOUT CROSSES, an Italian-French production from 1969. We haven’t seen many foreign language Westerns, but Johnny has brought most of them.

Director, co-writer and star Robert Hossein gets right to his grim tale: a woman named Maria (Michèle Mercer) hires a former lover, Manuel (Robert Hossein), to kill a wealthy cattle rancher and his sons who lynched her husband. Maria’s husband and his two brothers, all sheep owners, had stolen a cache of gold intended for the cattle rancher in retaliation for being forced to sell off their livestock.

Hossein brings a brutal nihilism to the film, but he also imbues it with a surreal quality that sometimes works and sometimes doesn’t. Take the ghost town where Manuel holds the cattle rancher’s daughter prisoner until the ransom Maria demands is paid. It looks and feels like something out of a twisted fairy tale. And whenever Manuel must use his six-shooter, and he does so with deadly accuracy, he always slips a black leather glove on his right hand, though he shoots with his left hand. Maybe it’s to protect his right hand when he fans his revolver, but we never see him do that.

The cinematography is so sharp you can almost taste the grit. The musical score is practically a character unto itself (though much louder and bombastic than Ennio Morricone’s wildly energetic and memorable Western scores, such as Sergio Leone’s THE GOOD, THE BAD AND THE UGLY).

With a running time of 90 minutes, CEMETERY WITHOUT CROSSES is available on DVD, Blu-ray, and for rent on Amazon Prime.

Along with Johnny, record nine-time Spur Award-winning author and Owen Wister Award winner (take a look at his A THOUSAND TEXAS LONGHORNS), our group includes Kirk Ellis, Emmy-winning screenwriter and producer of HBO’s JOHN ADAMS and TNT’s INTO THE WEST, Kirk’s wife, Sheila, David Morrell, award-winning author and New York Times best-selling author of FIRST BLOOD, the novel that introduced the character Rambo, and Robert Nott, award-winning journalist and author of several books on Western films, including his most recent THE FILMS OF BUDD BOETTICHER.

Watch the trailer for Cemetery Without Crosses below