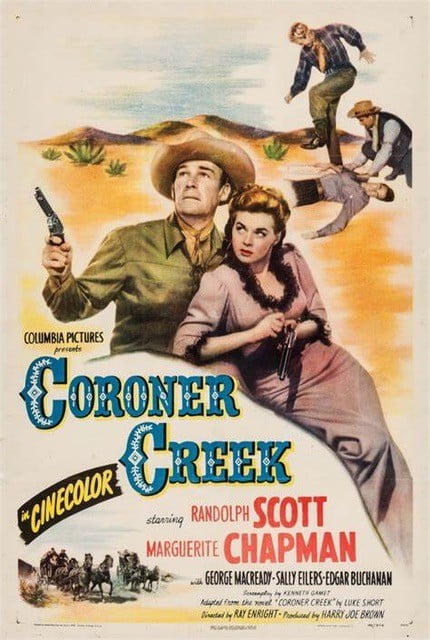 An engaging tale of vengeance was Robert Nott’s choice for our latest Western Night virtual gathering. CORONER CREEK, a B Western released in 1948, finds Chris Danning (Randolph Scott) in pursuit of a man he knows only to be tall and blonde with a scar on his right cheek. Chris’s reasons for his search aren’t fully clear early on, but he finds him months later in the town of Coroner Creek, and it doesn’t bother Chris a bit that the man, wealthy rancher Younger Miles (George Macready, excellent in dastardly roles), runs the town. He also finds out that Miles’s wife, Abbie (Barbara Read), an unhappy woman who drinks too much, happens to be the daughter of the sheriff (Edgar Buchanan) who appears oblivious to nefarious actions Miles takes, like trying to take neighboring ranches by any means.

One of the surprises about Kenneth Gamet’s screenplay, based on a Luke Short novel, is how Chris, after finding Miles, chooses to confront him. It’s not a showdown in the street or a courtroom confession. It starts when Chris gets offered a job to come to work for Miles, a man used to getting his way. When Miles sees Chris in the saloon and insults him for not taking him up on his offer, Chris gets up to leave. You think the scene is over, but the tension ratchets up quick when Chris announces to the crowded saloon that he had to take Miles’s wife home the night before because she was too drunk to get herself there. (All true.) Chris is told nobody has ever called Miles out like that before in public, so Chris decides to keep the pressure on him that way.

Another surprise is a fistfight between Chris and Miles’s hired gun hand, Ernie Combs (Forrest Tucker), that turns brutally vicious, more so than the bare knuckles brawl between John Wayne and Montgomery Clift in RED RIVER released that same year.

There are other unexpected moments, as well. While some work, others don’t, leaving the film feeling a little uneven at times. Still, it makes for a great way to spend a Saturday afternoon.

With a running time of ninety minutes, CORONER CREEK is available on youtube.

Also, this was one of the first of Randolph Scott’s collaborations with producer Harry Joe Brown after forming their production company, Producers-Actors Corporation. It would soon be changed to Ranown Productions, a combination of Scott’s first name and Brown last’s name. Several highly regarded later Ranown films, directed by Budd Boetticher, include RIDE LONESOME, THE TALL T and SEVEN MEN FROM NOW.

Along with Robert, award-winning journalist and author of several books on Western films, including THE FILMS OF RANDOLPH SCOTT and his most recent THE FILMS OF BUDD BOETTICHER, our group includes Johnny D. Boggs, record eight-time Spur Award-winning author and Owen Wister Award winner whose latest work is A THOUSAND TEXAS LONGHORNS, Kirk Ellis, Emmy-winning writer and producer of HBO’s JOHN ADAMS and TNT’s INTO THE WEST, Kirk’s wife, Sheila, and David Morrell, award-winning author and New York Times best-selling author of FIRST BLOOD, the novel that introduced the character Rambo.

Watch “Coroner Creek” and drop your thoughts in the comment section below.