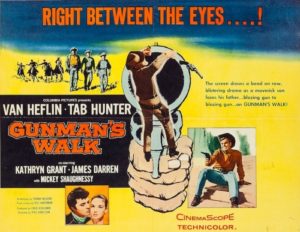 At our latest Western Night get-together, Johnny Boggs brought GUNMAN’S WALK (1958), a morality play about father and son rivalry, racism, lies, and the wrongheadedness of indulgence.

Tough rancher Lee Hackett (Van Heflin), a widower, loves both his boys, but his oldest, Ed (Tab Hunter) he indulges far too much, and the other, Davey (James Darren, pre-GIDGET), is becoming a disappointment to him. Ed is a swaggering bully who hates Indians and is fast with a gun. Davey, on the other hand, is a careful sort and has fallen for Clee (Kathryn Grant), a half-Sioux Indian girl who helps out at the Indian Agency Trading Post. Things go bad, murder follows, lies get told.

Cast against type, Tab Hunter called this one of his best films because it allowed him to show he could act and was more than a blonde-haired, square-jawed, pretty face on the big screen. But it almost didn’t happen. The story goes that when he met Columbia Pictures’ president Harry Cohn, a cruel, uneducated man and one of the meanest of the movie moguls, Cohn’s first words were, “I wanted Paul Newman for the role, but I guess you’ll do.” Hunter responded, “Well, then get him,” and walked out of Cohn’s office. Cohn told his secretary to get Hunter back. Returning to Cohn’s office, Hunter was handed the script by Cohn who said, “Read it and get back to me.”

Directed by Phil Karlson (who started out as a prop man and would go on to make his mark with gritty, violent crime films like KANSAS CITY CONFIDENTIAL) and written by Frank Nugent (best known for his Westerns with John Ford including THE SEARCHERS), GUNMAN’S WALK is a harrowing, remorseless film. You almost want to look away, but you can’t.

Along with Johnny, record eight-time Spur Award-winning author whose works include RETURN TO RED RIVER, our groups includes David Morrell, award-winning author and New York Times best-selling author of FIRST BLOOD, and Robert Nott, award-winning journalist and author of THE FILMS OF BUDD BOETTICHER. Kirk Ellis, Emmy-winning screenwriter and producer of HBO’s JOHN ADAMS and TNT’s INTO THE WEST, was away.