WESTERN NIGHT AT THE MOVIES: GUNSLINGER (**) 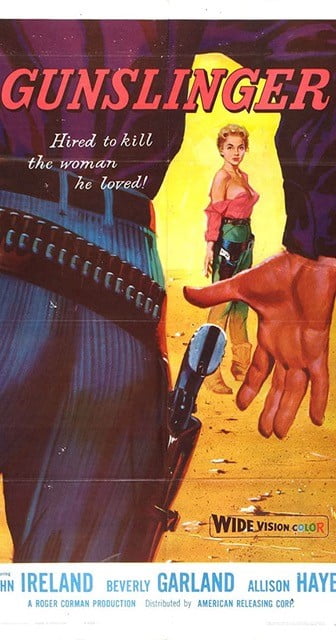 Corman hatched the plot for GUNSLINGER when he took screenwriter Charles B. Griffiths to see a Western called THREE HOURS TO KILL starring Dana Andrews. According to Griffiths, after watching the picture, Corman said to him, “I want you to do the same picture but with a woman as the sheriff.”

The plot is simple enough. When the sheriff of the town of Oracle, Texas, is murdered, his wife, Rose Hood (Beverly Garland), says she’ll take the job temporarily. The new sheriff won’t arrive for two weeks but Rose is determined to find those responsible for her husband’s killing.

Corman shot the film in six days and it’s definitely a B Western. While his direction appears hasty and clumsy in places, there are moments where the film is a hoot. At her husband’s funeral, Rose recognizes one of the men who shot her husband in the back, grabs the deputy’s revolver, and shoots the man twice right there in front of everybody. Then she hands the mayor her husband’s badge saying she’ll take the job of sheriff, but the mayor’s reluctant to appoint a woman sheriff, so the mayor’s wife tells him, “Oh, pin it on and get it over with, I’ve got a beef roast in the oven.”

Garland demonstrates real resourcefulness and pluck in her role, and she knows how to handle a gun as well as any man. The film also features John Ireland (RED RIVER) delivering a somewhat wooden performance as Cane Miro, a killer hired by conniving, ruthless saloon owner Erica Page, played to the hilt by Allison Hayes (ATTACK OF THE 50-FOOT WOMAN) who’s been quietly buying up land all around Oracle. Seems the railroad just might be coming that way.

During filming, Hayes fell from her horse at one point and broke her arm. While waiting for an ambulance to arrive, Corman shot close-ups of her to use later in the film. Garland believed Hayes might have fallen on purpose as a way to try to get off the picture.

GUNSLINGER is available on youtube.com.