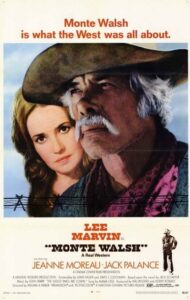 Based on the novel by Jack Schaefer, best known for SHANE, MONTE WALSH is the story of a dying breed: the cowboy who refuses to give up or give in. Schaefer introduced Monte in a series of short stories, later collecting them into a novel, mostly set in New Mexico. Much of that book is not in this film, written by Lukas Heller (THE DIRTY DOZEN) and David Zelag Goodman (STRAW DOGS), but the spirit of the novel most certainly comes through.

Marvin took the role because he was anxious to play a romantic lead, something he had not yet done in films.  As Monte, he embodies the lone cowboy with his gravelly voice and a face etched with the experience of decades riding the range, but there’s also real affection in his scenes with Martine (Jeanne Moreau), the prostitute he visits now and then, but she refuses to take his money. Their best scene is without dialogue as they lay in bed and she kisses him over and over as he concentrates on rolling a cigarette. Their story, though, is heartbreaking.

The West that Monte and his fellow cowboys know is dying, with ranch lands consumed by a big Eastern conglomerate. As Monte’s friend Chet (Jack Palance in a rare sympathetic role) says to him, “Nobody gets to be a cowboy forever.” Some of the boys find other work, off their horses, while others follow an outlaw path. Monte gets offered a well-paying job playing a star broncobuster in a traveling Wild West show. His response is the code of the cowboy and worth the time to watch the film.

Originally, Howard Hawks was approached about making the movie, but when Marvin, already signed for the role, arrived for talks with Hawks roaring drunk, Hawks passed. (Hawks had hoped to cast John Wayne in the film and then went on to make RIO LOBO with Wayne instead.) Marvin, who had considerable say during the production, convinced cinematographer William A. Fraker to direct the picture, his first as a director. (In spite of a couple of clumsily handled scenes, Fraker does a terrific job.) Also, since Fraker knew about Marvin’s drinking, (they had worked on PAINT YOUR WAGON prior to this film), accommodations were made during the Arizona location shoot. One accommodation was that Fraker, knowing Marvin’s tendency to begin drinking in the afternoon, scheduled a sunset scene to be shot at dawn.

MONTE WALSH is available on DVD, Blu-Ray, and youtube.com.