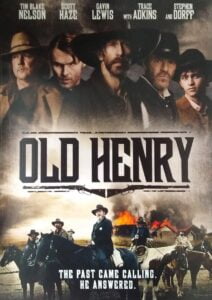 This time it was my turn to select the film for our Western Night gathering and I chose OLD HENRY released back in October of this year.

While I had seen it a while ago, the others in our group had not and I said we should just watch it cold offering no clues or enticements regarding the story but I did say it takes place in Oklahoma Territory in 1909.

What I will reveal here is that it’s a good, solid Western. It opens with a chase and things may or may not be what they seem regarding a satchel of money and an injured man. There are some men rough as bark and wearing badges that are in no mood to listen to stories or make bargains. But neither is old Henry.

The film has a few story flaws, but they are more than made up for by the surprises revealed, both big as well as subtle in writer/director Potsy Ponciroli’s screenplay.

Ponciroli’s cast is to a man just right, including county singer Trace Adkins as Henry’s brother-in-law, and Stephen Dorff as a no-nonsense sheriff. Unfortunately, Scott Haze playing an outlaw on the run tends to mumble his words.

But the standout is Tim Blake Nelson. Probably best known for his roles in the Coen Brothers films OH BROTHER, WHERE ART THOU? and THE BALLAD OF BUSTER SCRUGGS, Nelson brings a flinty edge to Henry that, well, sharpens to a deadly point.

Shot on location in western Tennessee, you can almost taste the grit, smell the campfire smoke, and feel the tension rising in the air.

With a running time of 99 minutes, OLD HENRY is available on DVD, Blu-Ray and also on Amazon Prime.