WESTERN NIGHT AT THE MOVIES: 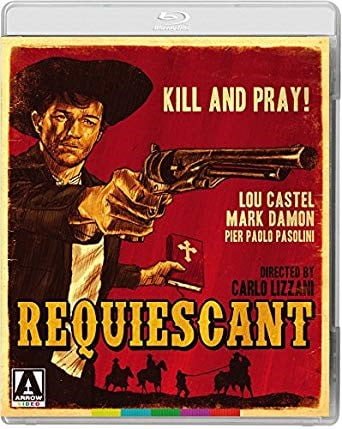 Absurd, grotesque, violent, and bizarrely humorous pretty well sums up the 1967 Italian spaghetti Western REQUIESCANT (translated roughly as “May they rest in peace”) that Kirk Ellis chose for our latest Western Night at the Movies get-together.

I can’t say I enjoyed the picture exactly, but I was curious and kept watching.

The film’s director, Carlo Lizzani, along with his contemporaries in Italian cinema in the 60s such as Damiano Damiani and Sergio Corbucci, used the Western as a metaphor to express his political leanings. The political allegory is obvious at the opening of the film, when a racist, aristocratic, ex-Confederate Texas landowner named Ferguson (Mark Damon) and his men, lure Mexican villagers into believing they will all live in peace together and then slaughter them using a Gatling gun. However, the film also manages some unexpected touches, as when a little boy, the only survivor of the massacre who was grazed by a bullet and knocked out, is found wandering in the desert by a missionary couple and their young daughter, Princy.

Cut to ten or so years later. Princy longs for adventure and runs away. The boy, now a man, promises to find her and, riding into a town as the bank is being robbed, discovers by quirky accident that he’s an expert shot, though he’s never fired, let alone handled, a revolver before. Soon he finds Princy, who’s been forced into prostitution by Ferguson’s top gunslinger. A drunken and unorthodox shooting contest between hero and villain follows, along with mishaps, close calls, run-ins with a revolutionary priest (played by Italian director Pier Paolo Pasolini), and an ever-increasing body count.

As the title character, called Requiscant because he prays over the body of each man he kills, Lou Castel, (perhaps best known for A BULLET FOR THE GENERAL), projects the right balance of innocence and wonder as he faces a grim, corrupt world. He’s like Candide in the Old West.

But director Lizzani seemingly uses Mark Damon’s bizarre villain to make his most overt political comment by having the actor in pale make-up, giving him the appearance of a vampire, and accenting his wardrobe with a Dracula-like cape. 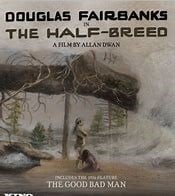 The other feature Kirk brought was the 1916 silent picture, THE HALF-BREED, starring Douglas Fairbanks and directed by Allan Dwan, whose Hollywood career spanned fifty years. Based on the Bret Harte story, “In the Carquinez Woods,” it tells a tale of racial prejudice. Filmed on location in Sequoia National Park, the picture is filled with astonishing visuals.

Also in attendance with Kirk, Emmy-winning writer and producer of HBO’s JOHN ADAMS and INTO THE WEST, were Johnny D. Boggs, seven-time Spur Award winner, Robert Nott, award-winning journalist whose new book on the films of director Budd Boetticher is due out soon, and David Morrell, New York Times bestselling author of FIRST BLOOD.