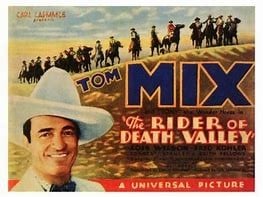 At our Western Night at the Movies evening last Sunday, it was Johnny D. Boggs’ turn to curate. He brought RIDER OF DEATH VALLEY (aka RIDERS OF THE DESERT), a Tom Mix film from 1932 about greed and its terrible price.

Mix plays the hero trying to thwart the efforts of the unscrupulous Doc Larribee and his henchman, Lew Grant, while also attempting to protect Helen, a young naïve woman from the east whose brother Bill found gold in Death Valley but was killed before registering his claim. Bill did draw a map showing the location of his mine, and Doc and Grant murdered Bill, but they couldn’t get their hands on it before Mix arrived, tearing it into three pieces, temporarily thwarting their nefarious plans.

Following the map, with Mix, Doc and Grant each holding a piece of it, the quartet arrives at the mine, but they are soon stranded. With both water and time running out, desperation sets in leading to folly and worse on one hand, and heroics and salvation on the other. While not in the league of THE TREASURE OF THE SIERRA MADRE (1948) with Fred C. Dobbs butchered by bandits, or Erich von Stroheim’s poor dentist in GREED (1925) who, after murdering his wife for not sharing her lottery winnings with him, ends up in the middle of Death Valley shackled to a dead man, RIDER OF DEATH VALLEY still surprises in defeating expectations.

Tom Mix made nearly 300 films in his career, and all but nine were silent movies. While stiff as an actor and reluctant to get into talking pictures because he was nervous about his voice, Mix did perform his own stunts, and this film features a couple of dangerous ones. (He would eventually retire in his 50s after suffering many broken bones and few skull fractures.)

Johnny’s second selection was a GUNSMOKE television episode from 1962 called “The Gallows.” This very dark tale follows Marshal Dillon taking a prisoner to hang for a crime he may well not have committed. Johnny told us this episode is considered the most depressing in the GUNSMOKE series. It’s also one of the most engaging.

Along with Johnny Boggs, seven-time Spur Award-winning author, others in attendance that night were Robert Nott, award-winning journalist and author of a soon-to-be-released book on the films of director Budd Boetticher, David Morrell, award-winning author and New York Times best-selling author of FIRST BLOOD, and Kirk Ellis, Emmy-winning writer and producer of JOHN ADAMS and INTO THE WEST.