WESTERN NIGHT AT THE MOVIES THE BALLAD OF LITTLE JO (***) 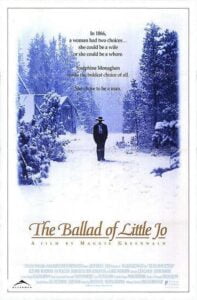 For our Western Night session this month, Sheila Ellis chose THE BALLAD OF LITTLE JO, an astonishing film inspired by a true story of a woman, shunned by her family for having an illegitimate child, who came West and, in order to survive, dressed and acted like a man, even to the point of taking drastic measures.

Suzy Amis is a revelation as Little Jo. She’s in almost every scene, the center of the story. Her determination and resourcefulness are often tested in amusing, brutal, unexpected, and heartbreaking ways.

Others in this strong character-driven film include Frank Badger (Bo Hopkins), a hard-nosed sheep rancher who thinks nothing of stringing up a Chinese man for simply showing up where he’s not wanted, Percy Corcoran (Ian McKellen), a displaced Englishman with a twisted bent to his soul, and Ruth Badger (Carrie Snodgrass) the local doctor whose methods include a tablespoon of kerosene to get you feeling better.

Shot on location in Montana, writer-director Maggie Greenwald and her cinematographer Declan Quinn imbue the film, set in the late 1800s, with rich, authentic details, from frigid cold winter scenes to patched up sheepskin jackets to a palatable crudeness that permeates the proceedings. The film also has a natural lyrical feel, but make no mistake, these are badlands where a friend can suddenly turn violent, where saving a life could cost you your own.

Released in 1993 and distributed by Fine Line Features, the film played for only a few days in most venues. It is well worth a look now. With a running time of 121 minutes, it’s available on DVD, but check Amazon Prime, too.

Along with Sheila, our group includes Johnny D. Boggs, record eight-time Spur Award-winning and Owen Wister Award-winning author whose latest work is A THOUSAND TEXAS LONGHORNS, Kirk Ellis, Emmy-winning screenwriter and producer of HBO’s JOHN ADAMS and TNT’s INTO THE WEST, David Morrell, award-winning author and New York Times best-selling author of FIRST BLOOD, and Robert Nott, award-winning journalist and author of several books on Western films, including his most recent THE FILMS OF BUDD BOETTICHER.

Watch “The Ballad of Little Jo”