WESTERN NIGHT AT THE MOVIES: THE COWBOY AND THE INDIANS (**) 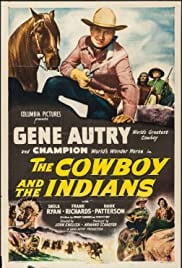 For our December movie watching, Johnny D. Boggs chose a surprising Gene Autry picture called THE COWBOY AND THE INDIANS.

It’s surprising because Autry, whose company produced this B Western, presented something only a handful of silent films, like THE VANISHING AMERICAN, and fewer sound pictures, such as MASSACRE, had done prior to 1949 when this film was released. This contemporary Western – featuring horses and automobiles — portrayed Native Americans in a decent and sympathetic light. It all starts when rancher Gene Autry finds some of Navajos stealing from his land. Riding out to confront them, he discovers that many of the men, women and children are suffering from malnutrition. Wanting to help, he faces off against Smiley Martin (Frank Richards), the crooked trading post agent and his sheep-murdering cronies (including pre-LONE RANGER star Clayton Moore, more on that in a moment), who are charging inflated prices for inadequate goods and food, as well as trying to cheat the Navajo out of their scared artifacts. Smiley even sinks so low as to frame Autry’s new Indian friend, Lakoma (pre-LONE RANGER co-star Jay Silver Heels), for the murder of the tribe’s chief.

(Big studios were already at work on films exploring similar themes, including the excellent DEVIL’S DOORWAY from MGM and BROKEN ARROW from 20th Century-Fox, both released the following year.)

While unique for what it attempted to do, THE COWBOY AND THE INDIANS has its failings such as John English’s by-the-numbers direction and a couple of one-note villains. Also, Autry, famous as a singing cowboy, does sing several songs in the film, including “Silent Night” and his 1947 hit, “Here Comes Santa Claus.” The odd thing, though, is that the picture isn’t set during the Christmas season and nor was it released at Christmas time, giving it a momentary surreal feel when the songs appear.

And a little Hollywood history: the film opened on September 15, the same day that ABC television premiered their new Western series, THE LONE RANGER, starring the previously-mentioned Clayton Moore in the title role and Jay Silver Heels as his friend Tonto.

Along with Johnny, record eight-time Spur Award-winning author and Owen Wister Award winner whose latest work is A THOUSAND TEXAS LONGHORNS, our group includes Kirk Ellis, Emmy-winning screenwriter and producer of HBO’s JOHN ADAMS and TNT’s INTO THE WEST, Kirk’s wife, Sheila, David Morrell, award-winning author and New York Times best-selling author of FIRST BLOOD, the novel that introduced the character Rambo, and Robert Nott, award-winning journalist and author of several books on Western films, including THE FILMS OF RANDOLPH SCOTT and his most recent THE FILMS OF BUDD BOETTICHER.

Watch the movie and let us know what you think!