WESTERN NIGHT AT THE MOVIES: THE FABULOUS TEXAN 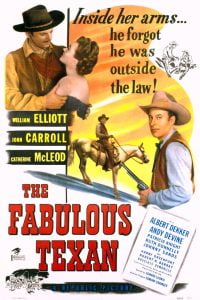 It was Robert Nott’s turn to select the film for our latest Western Night gathering. He particularly likes old B-Westerns, low budget action yarns shot on short, tight schedules, and he brought one most of us were unfamiliar with called THE FABULOUS TEXAN (1947).

After the Civil War, ex-Confederate soldier friends Jim McWade (William Elliot aka Will Bill Elliot) and John Wesley Baker (John Carroll, quite good in FLYING TIGERS), return to Texas only to find the state under the iron authority of Gibson Hart (Albert Dekker) and his Texas State Police. Civil rights have been suspended, like freedom of speech, and Hart is getting rich snatching up land as citizens have no money to pay their taxes. The two friends take different paths to end to this strife. There’s also a love triangle with McWade set to marry his sweetheart Alice Sharp (Catherine McLeod) who’s actually in love with Baker.

Written by Lawrence Hazard (STRANGE CARGO) and Horace McCoy (THEY SHOOT HORSES, DON’T THEY?), the screenplay feels like too many ideas were trying to be included resulting in a muddled mess. The Texas State Police was formed after the Civil War, but it’s unclear here exactly who they are (aside from being uniformed thugs with badges) and how they differ from Union soldiers who are also in the state as part of Reconstruction efforts. Subplots are introduced then dropped. Characters come and go, the most obvious being first-billed star Elliot who disappears for nearly a third of the picture. It’s all unfortunate because there does appear to be a decent story amid the murkiness.

Director Edward Ludwig, perhaps best known for THE FIGHTING SEEBEES with John Wayne, has an effective couple of set pieces, like the final shootout in a swamp.
With a 95-minute running time, THE FABULOUS TEXAN, shot in black-and-white, does not appear to be currently available online.