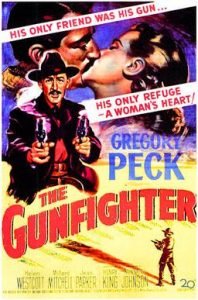 For our Western Night at the Movies gathering, I brought one of my favorites, THE GUNFIGHTER, released in 1950 by Twentieth-Century Fox.

Gregory Peck plays outlaw Jimmy Ringo with a laconic stance that also conveys the weariness of carrying the weight of a reputation he desperately wanted in his youth but now realizes is nothing but a target for every quick-draw kid wanting to make a name for himself. Early in the film, one of those kids (played by a young Richard Jaeckel) sees Ringo come in a saloon and says to a friend that Ringo “don’t look so tough to me.” His friend says, “If he ain’t so tough there’s an awful lot of natural deaths in his vicinity.”

Much of the taut screenplay, written by William Bowers and William Sellers, plays against the ticking clock as Ringo goes to the town of Cayenne to find the wife he hasn’t seen in years and the young son he’s never met in the hopes of finding a way out of his dark life as a gunfighter.

Meanwhile, there are three vengeful brothers after him, school kids trying to catch a glimpse of him, and others anxious to see him gone, one way or another.

Peck’s costars include the terrific character actor Millard Mitchell as Marshal Mark Strett, a former friend of Ringo’s trying to maintain order, and Skip Homeier, as a callow “squirt” with two guns on his hips.

Critics praised the film. It received an Oscar nomination for Best Original Story. A year later, Peck was offered the lead in HIGH NOON but turned it down believing it would typecast him.

Two Hollywood tales resulted from this film. The original story for the picture was written with John Wayne in mind to play Ringo. Writer John Bowers recalled that he took it to Wayne who loved it and offered him $10,000. Bowers felt it was worth more. He said Wayne told him, “Well, you said you wrote it for me, don’t you have any artistic integrity?” Bowers said, “No.”

The other tale concerned Peck’s mustache. When Twentieth-Century Fox president Spyros Skouras saw the first dailies, he hated Peck’s mustache and wanted him to shave it off and for filming to start fresh. The cost to begin reshooting was deemed too high, so the mustache stayed. Later, after studio owner Darryl Zanuck, (who had been in Europe during the film shoot) saw a first cut of the picture, he worried that the mustache on his star, who was very popular with female fans, would kill that popularity. On it’s release THE GUNFIGHTER fell short of expectations at the box office. For years after, Skouras said Peck’s mustache cost the studio millions.

Watch “The Gunfighter” with Gregory Peck