WESTERN NIGHT AT THE MOVIES: THE LAST OF THE FAST GUNS (**) 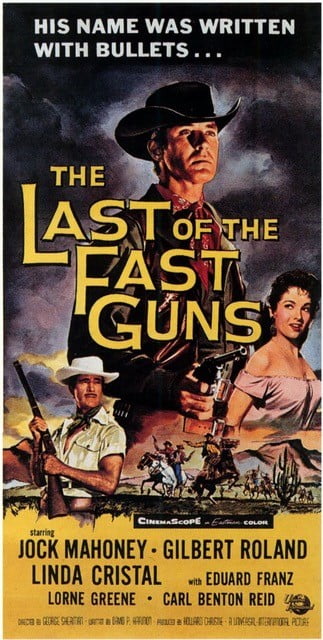 An elegiac-themed Western, THE LAST OF THE FAST GUNS (1958) was David Morrell’s choice for our latest Western Night at the Movies virtual gathering.

This Universal B picture opens intriguingly with a black-clad rider passing a cemetery where an open grave waits. In the town, the rider dismounts, faces a gunfighter in a shoot out and kills him. (The open grave was for the loser of the contest.) The rider then gets invited to see a wealthy old man who’s confined to a wheelchair who offers him $25,000 to go to Mexico to find his long-lost brother.

Directed by George Sherman (probably best known for BIG JAKE fifteen years later) and with a screenplay by David P. Harmon (whose credits include myriad TV series from THE RIFLEMAN to STAR TREK to S.W.A.T.), the film plays as a Western, but there are also shades of noir. The rider is Brad Ellison (Jock Mahoney), a famous shootist who’s lived his life by the gun but knows his time is running out. Dressed in black and riding a black horse, he trusts few men. He’s even suspicious of those who try to help him, like Sam Grypton (Edward Platt) who operates a hideout hacienda for outlaws down in Mexico, and Miles Lang (roguish Gilbert Roland), a horse wrangler who may or may not know more than he lets on. And while there are double crosses and a surprise along the way, there are also dull stretches and the story begins coming apart.

Part of the problem is Jock Mahoney. The way he plays his character just feels off. He comes across as angry and churlish, but much of his dialogue, like “nobody wins a gunfight” and “I never met a man who forgot a grave he dug,” suggests a character suffering from a weariness of the soul.

In spite of these problems, the film is astonishing to look at. Photographed almost entirely on location in Mexico by Alex Phillips, who shot more than 200 films there during his career, it is stunningly gorgeous, giving this B Western an A picture look.

With a running time of 82 minutes, THE LAST OF THE FAST GUNS can be found online.