WESTERN NIGHT AT THE MOVIES: THE PROUD REBEL (***) 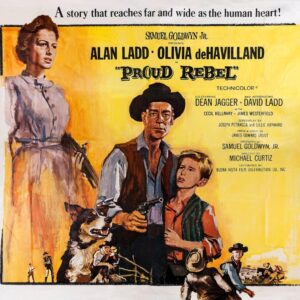 One of the most enjoyable things about our Western Night gatherings is watching a film that defeats expectations. Kirk Ellis did just that with THE PROUD REBEL (1958). It’s not about an ex-confederate still fighting the Civil War. Rather, it concerns a confederate who’s accepted the war is over and comes to Illinois trying to find a cure for his mute young son. The malady is called “hysteria paralysis” brought on by witnessing his mother killed and home burned during the war. While it may all sound a bit mawkish, it never plays that way. (In spite of that, be prepared to tear up.)

Alan Ladd plays John Chandler and it’s hard to disassociate him from his defining role in SHANE, particularly since there are similarities between the two characters as both try to downplay their pasts. Ladd’s real life son, David, portrays his son here in an astonishing and natural performance. As Linnett Moore, the determined spinster farm owner who tries to help Chandler and his boy, Olivia de Havilland (GONE WITH THE WIND) brings an assured toughness to her character. There are bad guys, too, namely the Burleigh family, a nasty father and his two sons, played by Dean Jagger, Harry Dean Stanton and Thomas Pittman.

Written by Joe Petracca and Lillie Hayward and directed by Michael Curtiz (who worked in nearly every genre including films like DODGE CITY, MILDRED PIERCE, YANKEE DOODLE DANDY and CASABLANCA), what truly stands out about the film is that the characters want something better for themselves. Chandler’s devotion to his son drives him to find a cure. David does not want to be helpless. Linnett wants to make a go of her farm and refuses to knuckle under to the Burleighs who themselves desire her land so they can have more space to run their sheep.

There’s also a dog, “who means more to David than his voice,” and has a talent for herding sheep. I’ll just say the dog plays a very pivotal part in the picture.

Shot in Utah standing in for Illinois, THE PROUD REBEL has a running time of 1 hour and 43 minutes and is available on DVD, Amazon Prime and youtube.

Watch the movie below and let us know your thoughts!