WESTERN NIGHT AT THE MOVIES: THE TALL MEN 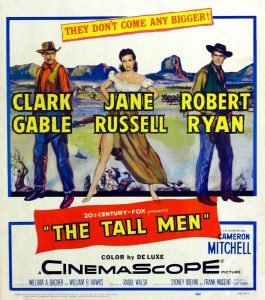 It isn’t often that we watch a film that none of us has ever seen, or only caught a few minutes of many years ago. But that was the case at our latest get-together with David Morrell’s selection of THE TALL MEN (1955).

Directed by Raoul Walsh (THEY DIED WITH THEIR BOOTS ON) and starring Clark Gable, Jane Russell, Robert Ryan, and Cameron Mitchell, none of them strangers to Westerns, THE TALL MEN draws you in quickly. A year after the Civil War up in snowy Montana, ex-Quantrill Raider brothers Ben and Clint Allison (Gable and Mitchell) rob Nathan Stark (Ryan) of his thick money belt. But then Stark offers them a job: help him drive a herd of cattle from Texas to Montana where they haven’t seen a beefsteak in five years. This setup has intriguing potential as neither the brothers nor Stark are out and out bad, but they aren’t exactly honest either.

Soon enough, though, the script by Sydney Boehm (THE BIG HEAT) and Frank Nugent (STAGECOACH) from a novel by Clay Fisher (a pseudonym for Western author Henry Wilson Allen, aka Will Henry [SANTA FE PASSAGE]), begins to wobble. Much time is devoted to setting up the character triangle as feisty Nella Turner (Russell), rescued from an Indian attack by Ben, falls for him. But Ben’s dreams are small, and Nella has much bigger ambitions, something Stark tells her he can deliver. The actors are game, but this business drags out in starts and stops, and attempts at humor fall flat.

The cattle drive doesn’t begin until halfway into the film; (the movie is two hours long). There are some good action moments like when a band of greedy Jayhawkers try to force Ben and Stark to pay them to cross their five thousand cattle into Kansas at a dollar a head. But there are ridiculous scenes, too, such as when they run the herd through a rocky pass to prevent Sioux Indians from stealing the cattle. What happens leaves you watching in disbelief.

To their credit, Gable and Ryan give their all to playing otherwise underwritten characters. And the movie, much of it shot on rugged locations in Mexico, looks superb, thanks to Leo Tover’s cinematography.

THE TALL MEN is available on youtube, Amazon Prime, Blu-ray and DVD.

WATCH “THE TALL MEN” BELOW