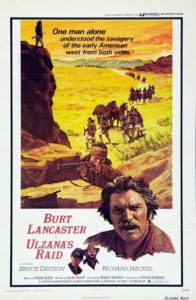 It sounds like a traditional Western, but it is not. It’s brutal, bloody and uncompromising. It’s also surprising. Most of the film concerns the arduous chase of the Apaches by a U.S. Cavalry unit with each side trying to outmaneuver and outsmart the other. Both sides make clever and calculated choices as well as grave and disastrous mistakes.

An army scout (played by the always watchable Burt Lancaster) and an Apache scout aid a young new lieutenant (Bruce Davison) in chasing Ulzana and his band across a parched, rocky and unforgiving landscape. Lancaster’s army scout possesses a dark and deadpan sense of humor. When Davison’s lieutenant exclaims that the Apaches are on foot, Lancaster responds that that’s “a mighty fair description of men without horses.” And Davison’s lieutenant, relying on his preacher father’s concept of decency in dealing with the renegade Apaches, finds himself putting his beliefs and honor to a Biblical “eye for an eye” test.

The direction by Robert Aldrich, arguably best known for THE DIRTY DOZEN and WHAT EVER HAPPENED TO BABY JANE, is both gritty and stark, and the screenplay by Alan Sharp (THE HIRED HAND and NIGHT MOVES), has a sly quality in that the story draws you into its unrelenting bleakness while also maintaining a sense of desperate humanity.

Along with Johnny D. Boggs, the record eight-time Spur Award-winning author whose books include TAOS LIGHTNING and RETURN TO RED RIVER, our group includes Kirk Ellis, Emmy Award-winning screenwriter and producer of HBO’s JOHN ADAMS and TNT’s INTO THE WEST, David Morrell, award winning author and New York Times best-selling author of FIRST BLOOD and MURDER AS A FINE ART, and Robert Nott, award-winning journalist and author of THE FILMS OF BUDD BOETTICHER.