WESTERN NIGHT AT THE MOVIES: UNFORGIVEN 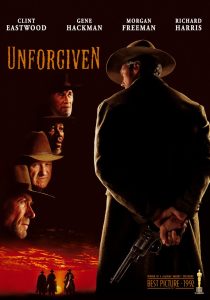 Some call this Western a classic. Others say it’s The Man with No Name grows a conscience. Ask me, it’s one of my favorite Western films, like THE WILD BUNCH, THE MAN WHO SHOT LIBERTY VALANCE, and THE OUTLAW JOSEY WALES. I just plain like it.

Pig farmer William Munny (Eastwood) and his former outlaw partner Ned Logan (Morgan Freeman) join up with a tough-talking youngster called the Schofield Kid (Jaimz Woolvett) on a trek to make some good money by killing two cowboys who cut up a whore in the Wyoming town of Big Whiskey. Munny’s wife, now deceased, made him change his evil ways, but he’s left responsible for his two small children, and try as he does, Munny is not cut out for pig farming.

He tries to reconcile his decision to commit cold blooded murder for pay, but circumstances and the vicious sheriff, Little Bill (Gene Hackman), push him to mete out his own form of justice at a dark and terrible cost. “It’s a hell of thing killing a man,” Munny says. “You take away all he’s got and all he’s ever gonna have.”

The Oscar-nominated screenplay, written by David Webb Peoples (BLADE RUNNER), was initially in the hands of Francis Ford Coppola. When he moved on to other projects, Eastwood got the script, read it, bought it and put it in a drawer, saying he had other things he wanted to first. He also believed he needed to “grow into the part.”

Along with Hackman and Freeman, the superb cast includes Richard Harris as the swaggering gunfighter English Bob, Saul Rubinek as a hack dime novel writer, and Frances Fisher as Strawberry Alice, the prostitute who sends out word of the reward.

The cinematography by Jack N. Green captures both the vastness of the land and the moody, claustrophobic interiors. And the town built by production designer Henry Bumstead evokes a time long past, forlorn and brutal.

At 2 hours and 11 minutes, the film is available on Amazon Prime to rent or buy, and also on Blu-Ray and DVD.

Watch the official movie trailer for “Unforgiven” below: