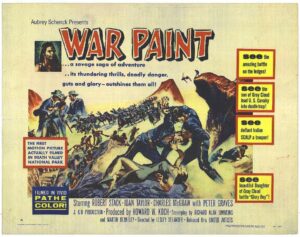 We’ve watched a number of B Westerns at our Western Night gatherings, many of them courtesy of Robert Nott who chose another one for our latest viewing called WAR PAINT (1953).

About a cavalry patrol ordered to deliver a peace treaty to an Indian chief in the next few days, this low budget B was the kind of Western that made Saturday afternoon matinees so exciting.

Following an opening shootout, we meet the troopers, including Sergeant Clarke (the gravel-voiced Charles McGraw), Tolson (a young Peter Graves) and Lieutenant Billings (a young Robert Stack) who’s determined to deliver the treaty on time in spite of obstacles in his way, not the least of which being they must trust an Indian (whom they don’t) named Taslik (Keith Larsen) to guide them. Taslik, who happens to be the chief’s son, also happens to arrive at the right moment. (Maybe coincidence, maybe not.) And skulking about is his sister Wanima (Joan Taylor), who believes treaties are nothing but lies.

Mostly the film works, though there are moments that play a little cheesy. (A rockslide that suddenly blocks their path is, well, let’s say the budget didn’t quite cover it.)

One of the surprises in the script by Richard Alan Simmons and Martin Berkely is that, like BROKEN ARROW with James Stewart three years earlier, it attempts to portray Native Americans in a sympathetic way, while also showing that compassion and understanding between people might just be attainable.

Director Lesley Selander shot the film on location in Death Valley, the sparse, unforgiving terrain adding to the brutal harshness of the story. Selander is credited by some film historians with having directed more American sound Westerns than any other director, having made between 100 and 110 from the mid-1930s to the 1960s. Though he worked with Hopalong Cassidy, Gene Autry, and Audie Murphy, among others, much of his Western work is routine, but now and then there were gritty exceptions, like WAR PAINT.

With a running time of 85 minutes, WAR PAINT is available on youtube.