WESTERN NIGHT AT THE MOVIES: WINGS OF THE HAWK (***) 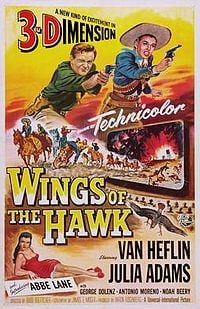 For our Western Night gathering this month, Kirk Ellis screened WINGS OF THE HAWK (1953). It’s a rip snorting Saturday afternoon at the movies kind of tale featuring lots of hard riding and derring-do.

Set during the Mexican Revolution in 1911, the film opens with Irish Gallager (Van Heflin), an American, getting his gold mining operation jumped by Colonel Paco Ruiz (George Dolenz) and his Federal troops. A chase ensues and Irish gets away, with the surprise help of a band of guerrillas led by the very resourceful Raquel Noriega (Julie Adams). Irish wants his mine back, and Noriega wants revenge against the evil Colonel Ruiz.

Part of the fun of the film is Heflin, the dour farmer in SHANE, released that same year. Here he plays a charming rogue and appears to be having a wonderful time doing many of his own stunts like falling off horses and bouts of fisticuffs with ne’er-do-wells. According to reports, Heflin liked to drink and did so while making this film.

Julie Adams, then known as Julia Adams, (CREATURE FROM THE BLACK LAGOON), also performs many of her stunts with gusto.

It’s a fast 83 minutes ably directed by Budd Boetticher, best known for the films he would later make starring Randolph Scott, including SEVEN MEN FROM NOW and RIDE LONESOME.

WINGS OF THE HAWK was shot in 3-D but by the time of its release, the fad was fading and a 2-D version was soon in theaters. The sharp, vivid colors of the Blu-ray we watched in 2-D looked wonderful. Also, for me, part of the unintentional fun of viewing 3-D films in 2-D is seeing flying objects like rocks, shrubbery and flames hurtling toward the camera in an almost surreal way.

One last thing, the title of the film has nothing to do with anything in the picture.