WESTERN NIGHT AT THE MOVIES: THE INDIAN FIGHTER (**) 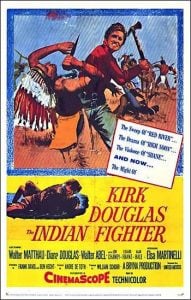 The other evening our Western Night at the Movies group met for a showing of two films. The first was an episode from the 1960 television series, THE WESTERNER, created by Sam Peckinpah. Co-written and directed by Peckinpah, the episode, entitled “Jeff,” has Dave Blassingame (Keith) riding into what appears to be a border town. His intention is to take a woman he once knew, named Jeff, away from the life of prostitution she’s been forced into by the saloon owner, a former prizefighter who keeps her there with both hard slaps and tender caresses. Grim and somber, it’s also an astonishing piece, especially for television back then, with its theme of salvation lost and a world where even doing the right thing can backfire. The irony was that the series was intended as a light-hearted adventure. But Peckinpah chose to run “Jeff” as the opening episode. The series lasted only one short thirteen episode season.

The main feature was THE INDIAN FIGHTER. Released in 1955, it was the first film produced through star Kirk Douglas’s production company. Johnny Hawks, (Kirk Douglas), an Army scout, leads a wagon train into Oregon Territory, but the Sioux Indians are wary of new white settlers as the whites have caused them trouble before. When a couple of gold seekers (Walter Matthau and Lon Chaney Jr.) get an Indian drunk in order to find out where the gold is on the Sioux land and end up killing him, Hawks must disobey Army orders to try to make peace.

It doesn’t sound bad from this synopsis. But the script by Frank Davis and Ben Hecht is chaotic with fine dramatic scenes alternating with awful and confusing ones to the point where you wonder what the filmmakers are trying to do. Early in the film, for example, Hawks finds Onahti, a beautiful Indian woman (played by Italian model turned actress Elsa Martinelli) down by the river. He leers at her, grabs her and tries to kiss her. She appears frightened as he advances and then manages to fight him off. He grins and chuckles as she runs away. This does not make for a sympathetic leading character. The next time they meet, they embrace and kiss like old lovers, which, apparently they are. Very confusing.

Ben Hecht (who wrote THE FRONT PAGE, SPELLBOUND, and numerous other films, both credited and uncredited) was brought in to fix the script. However, according to reports, everyone from Douglas to the make up man were offering suggestions to improve the script.

In fairness, director Andre de Toth (arguably best known for HOUSE OF WAX in 1953) does a superb job with the action sequences. In particular, the Indian attack on the fort is one of the best. Shot on location in Oregon, Wilfrid M. Cline’s cinematography is gorgeous. Both the action scenes and the photography are so good, I added the second star to my rating.