WESTERN NIGHT AT THE MOVIES 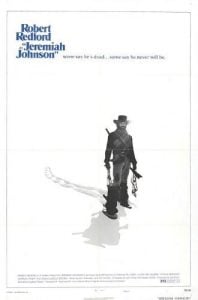 As it was my turn to curate the film for our Western film gathering last night, I brought one of my favorites. Jeremiah Johnson, the opening ballad in the film goes, went into the mountains, betting on forgetting his troubles. Maybe he hoped to find a better life, solitude, redemption. Hard to say, but Jeremiah went from whatever troubles that haunted him, only to find new troubles in his odyssey into the wilderness.

Starring Robert Redford and directed by Sidney Pollack, (they would make seven films together), JEREMIAH JOHNSON (1972) is at once stark and beautiful. It’s also one of Redford’s best roles. He is in every scene and carries both the film and Jeremiah’s sorrows with equal weight.

Episodic in its telling, the film leads up to the one-man war Jeremiah waged on the Crow tribe for killing his Indian wife and adopted white son. (Legend has it that the real mountain man John Johnston, the inspiration for this film, in retaliation for the killing of his Flathead Indian tribe wife, killed Crow warriors and ate their livers.) In a scene late in the film, Jeremiah sits one evening by a campfire with his friend Del Gue, (played by Stefan Gierasch) when a Crow Indian charges out of the dark with a savage cry and attacks Jeremiah. After the fight and the Crow brave dead, Jeremiah sits back down, a look of weary yet grim resolve on his face. Del asks Jeremiah if this is how it is now, that the Crow come at him one at a time to try to kill him. When Jeremiah says yes, Del says to him, “Maybe you best go down to a town, get out of these mountains.” Jeremiah ponders for a moment then says, “I’ve been to a town, Del.” The sadness in his voice is like a stab in the heart.

A different breed of men live in the mountains. Cranky but sage Bear Claw Chris Lapp (Will Geer, having a great time) shows Jeremiah the ways of the mountain; skinning hides, heating the cold ground to sleep on, hunting game. Tracking an elk through snow, Jeremiah and Bear Claw walk out on the opposite side of their horses as they get clear of trees to take a shot, and Jeremiah asks, “What if he sees our legs?” Bear Claw testily answers, “Elk don’t know how many legs a horse has!”

Del, though, hasn’t the refinement of Bear Claw. He’ll take an Indian scalp because there’s money in it. Jeremiah refuses to partake in scalping, Del responds, “Well, Mother Gue never raised such a foolish child.”
John Milius wrote the screenplay, based on the novel MOUNTAIN MAN by Vardis Fisher and the story “Crow Killer” by Raymond W. Thorp and Robert Bunker. Pollack called Milius’s script “mythical, as all Milius’s scripts are mythical, but [his] screenplay was primarily a piece of violence as almost all Milius’s stuff is.” In the original script, Pollack continued, Jeremiah “ripped Indians’ bodies apart and ate livers and screamed and blood ran down his beard and so on.” According to Milius, Redford and Pollack wanted something more intellectual and nuanced and brought in other writers to rewrite. (Edward Anhalt shares the writing credit on the film.) However, Milius says, they couldn’t tell the story or write the dialogue like him, so Redford and Pollack hired him back. Milius has said he gleaned the idiom from writer and poet Carl Sandburg and also Charles Portis’s novel TRUE GRIT.

This was Pollack’s second Western feature. His first, THE SCALPHUNTERS with Burt Lancaster, is overlong (or feels like it anyway) and plays too broadly. But JEREMIAH JOHNSON possesses a dignity and authenticity that are undeniable.

Due to the tight budget, reportedly $3.1 million, Warner Bros wanted to make the film on soundstages and shoot exteriors on their backlot and in Spain, but to their credit, Redford and Pollack insisted on the Rocky Mountains. Shot in state and national forests in Utah, the mountains and rivers and valleys are characters in their own right in the film, magnificent and bleak, treacherous and serene. Duke Callaghan’s cinematography is truly stunning.

With Utah locations so cold and the budget so tight most scenes were shot in one take. Redford said that one week the thermometer didn’t get up to zero once.
Pollack mortgaged his home so they could complete the picture. Unable to afford a name music composer to score the film, he hired Tim McIntire and John Rubinstein, both actors but also musicians, to compose the music. Pollack said they auditioned with a tape. It’s an astonishing score.

It was the first Western ever accepted in the prestigious Cannes Film Festival for competition.

Warner Bros. originally released the film at 116 minutes. That included an overture and exit music, as well as an intermission, though the film only has another 40 minutes remaining at that point. The running time without those elements is 107 minutes. The Blu-ray release contains both versions.

If you’ve never seen JEREMIAH JOHNSON, do. If you have seen it, perhaps it’s time to watch this hauntingly poetic film again.

The other members of our group in attendance last night were Johnny Boggs, Spur-winning author of RETURN TO RED RIVER, David Morrell, award-winning author and New York Times best-selling author of FIRST BLOOD, Kirk Ellis, Emmy-winning writer and producer of JOHN ADAMS and INTO THE WEST, and Robert Nott, award-winning journalist and author of biographies about Western film icons Randolph Scott and Joel McCrea, as well as co-authoring a memoir about Sam Peckinpah with Max Evans.