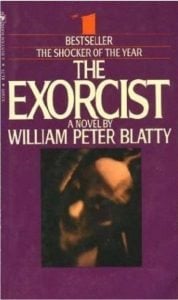 William Peter Blatty passed away on January 12, 2017. The cause was multiple myeloma.

His novel, THE EXORCIST, about a 12-year-old girl possessed by the Devil, was a landmark in horror fiction. The film version, directed by William Friedkin from Blatty’s screenplay, electrified audiences and became the first horror film to be nominated for an Academy Award. Blatty won an Oscar for his screenplay. His novel and the film about finding faith and facing evil took horror to a different level.

THE EXORCIST made horror believable.

I had the pleasure of interviewing Blatty for my book about the films of William Friedkin. He was very frank, forthcoming and gracious.