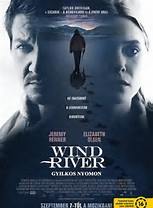 Yesterday my wife and I and some friends who love movies and Westerns saw WIND RIVER. Written and directed by Taylor Sheridan, who wrote last year’s excellent Oscar-nominated HELL OR HIGH WATER, WIND RIVER tells the story of a murder investigation on an Indian reservation in Wyoming. It opens on a moonlit night with a young, injured Native American woman running barefoot through the snow. A Fish and Game Department tracker (Jeremy Renner) finds her frozen body the next morning. An FBI agent (Elizabeth Olsen) is sent to investigate.

While there are a few small plot problems, this contemporary Western remains strong and engaging, drawing you in to the mystery that is revealed in an unexpected way. The believable characters possess flaws and strengths. Though set in Wyoming, it was filmed in the mountains and canyons of Utah. And, like the river in DELIVERANCE, the harsh, desolate, snow-covered landscape in WIND RIVER is as important and affecting a character in this terrific film as those Sheridan created. Highly recommended.